From Monday 20th September to Friday October 1st a number of events took place in Cork City to mark the national celebrations for Traveller Pride Week 2021. CESCA members the Cork Traveller Visibility Group (TVG) along with other Traveller Advocacy groups in the City were involved in organising, facilitating and supporting a number of events celebrating Traveller culture and the contribution Travellers make to Irish Society.

TVG is an independent, Traveller-led community development group in Cork. TVG pursues social justice & equality with Travellers to live free from discrimination & racism. You can find out more about the work TVG do via their website and their Facebook page has full updates on the activities that took place during Traveller Pride Week. 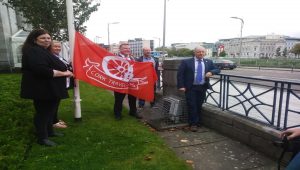 The celebrations for Traveller Pride Week kicked off with the raising of the Traveller Pride flag at City Hall with speeches from the Lord Mayor of Cork Cllr Colm Kelleher, Brigid Carmody of Cork Traveller Women’s Network and TVG Director of Advocacy Breda O’Donoghue. The late Tony Power and Michael McDonagh were remembered for their long record of work on Traveller rights and inclusion. 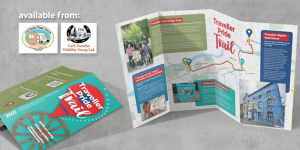 On Monday 27th September to Friday October 1st a Traveller Pride Culture Trail took place across the city. The trials were led by the Traveller Culture Ambassador team. The Trial included a Sulkieroo Box to celebrate Traveller horse ownership, a “Toraig on the Tobar” barreltop wagon exhibit, visits to the Traveller Pride wall mural at the TVG offices with discussions from Cork Community Art link and on September 29th TVG  also ran a Cant language and art workshop for children. 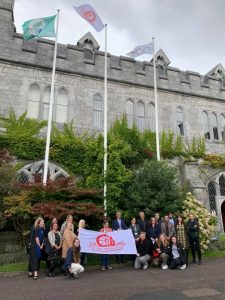 As the celebrations started with a flag raising above City Hall, representing greater steps towards removing barriers to inclusion for the Traveller Community in the city of Cork, so it finished with a flag raising ceremony above the city’s biggest university. On Wednesday 29th September the Traveller Pride flag was raised in University College Cork signifying solidarity and greater steps towards ensuring more Travellers benefit from the education system in Ireland.

In a week when we heard that the long anticipated report into the experiences of Traveller children in Ireland’s education system has still not been published, Traveller Pride Week is not only a celebration of the richness and importance of Traveller culture but is also an important part of the movement towards addressing the stigma and discrimination that Travellers continue to experience today.